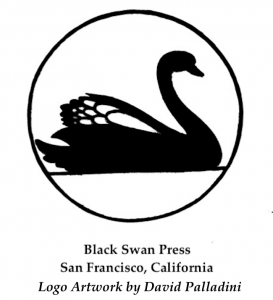 Welcome to Black Swan Press! We’re an independent publisher in San Francisco, producing books that we love. We aren’t limited to one field, or one type of book. We know what we love, and we want to share it with the world.

It is with great sadness that I update this page with the news of David’s death on March 13, 2019. He died peacefully at home in the early hours of the morning, having received devoted care from his home hospice caregivers the last few weeks of his life. I offer deepest condolences to his partner, Margreta, and his brothers, Mario and  Bill, as well as David’s other family members, and the large number of people all over the world whose lives have been touched by David’s inspired, soulful art. ~ Anastasia

Our second book is Painting the Soul: The Tarot Art of David Palladini, featuring all 78 cards form his Aquarian Tarot and New Palladini Tarot, both published by U.S. Games Systems, Inc. In this book, David reveals his ideas and inspirations for the cards, sharing his love of art and Tarot. The card meanings are explored by Anastasia Haysler, providing insight into the colors, symbols, and messages in Palladini’s beautiful images. This book is now available! 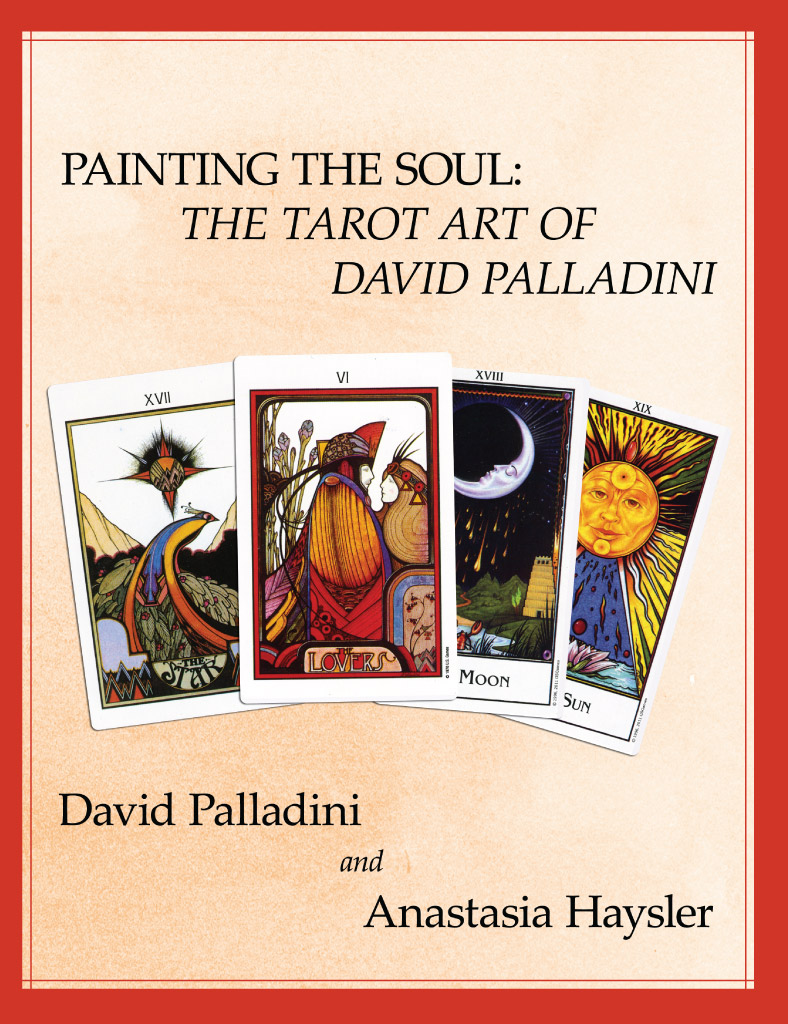 We have been graced with positive words from Rachel G. Pollack, Mary K. Greer and Lon Milo DuQuette!

“In this beautifully produced full-color book, David Palladini and Anastasia Haysler open the door–or rather 156 doors–into the elegant yet deeply meaningful world of Palladini’s two great decks, The Aquarian and The New Palladini.  In some ways, what is most remarkable about these two works is the nearly thirty years between them. Rarely does an artist allow a work to stand, to find its own way in the world–as The Aquarian certainly has done, being continuously in print for over forty years–and then return to the themes in a new work, a new vision, later in life.  By setting each card side by side with its counterpart, and giving a full page to each, the book allows us to immerse ourselves in David Palladini’s visions and what amounts to a dialogue between them.  For each card, the artist speaks of the image and its essence, its core meaning as he understands it.  Then, Anastasia Haysler’s clear and accessible interpretations of each card, in each deck, not only set the cards alongside each other but also in the context of Tarot tradition.  There is no long introduction about the history of Tarot, no set of instructions on how to do readings.  Instead, the book devotes itself, just as it should, to the art and soul of these two remarkable Tarot decks.”

– Rachel G. Pollack, Co-creator of The Burning Serpent Oracle, and author of The Child Eater: A Novel

“I have been enamored with David Palladini’s art since I first saw his paper company promo cards (I worked in a print shop) and later his first deck (an enlargement of his Justice card still graces my walls). To now read the stories of the Aquarian and New Palladini Tarot decks has been an utter delight. This is an essential work for adding depth to your readings and for appreciating the huge effect the Aquarian Tarot had on Tarot in the later 20th century. Furthermore, you will get a rare look into the growth and development of a masterful artist.”

~ Mary K. Greer, author of Who Are You in the Tarot?; 21 Ways to Read a Tarot Card; and Tarot for Yourself

“Painting the Soul: The Tarot Art of David Palladini is profound and breathtaking peek into mind and soul of a true spiritual artist… a work of art in-and-of itself.”

~Lon Milo DuQuette, Author of The Tarot of Ceremonial Magick; Enochian Vision Magick; and The Book Of Ordinary Oracles

Our first book is The Journal of An Artist by David Palladini.  David’s art career includes classical painting, advertising work, and private commissions. David is also the creator of The Aquarian Tarot and The New Palladini Tarot, both published by U.S. Games Systems, Inc. (We are not related to USG in any way.)

You can find out more about David Palladini on his site, and you can order both books through our affiliate, Tarot Media Company.

David’s books are currently our only titles in print. If you are looking for another book credited to Black Swan Press, you are probably looking for the Black Swan subsidiary of Surrealist Press, which you can find by clicking here.

This site uses Akismet to reduce spam. Learn how your comment data is processed.